For the longest time now I’ve been discovering music through the normal ways. Radio, TV, movies, concerts, recommendations from friends and colleagues. Until the internet and it’s awesome services came along you would still be discovering it through the “normal” channels. Early part of the net came along and you can start downloading tracks from your favorite sources. But still, this requires you to search and know what you are looking for. This doesn’t mean anything at all except easy access to music you already know and love.

Come Web 2.0, with collaboration and crowdsourcing, we now have more things helping us find music that we like thus my title. I’ve been lucky to have tried all the services above even if half of it is not available in outside of US (sadly and video services are even harder).

Let’s sit down and figure out how I’m loving or loathing these cool names.

Grooveshark, Zune and iTunes for me are similar sources just like before. They allow you easy access to music by allowing you to purchase or listen to the music easily. They have their own recommendation engine but none of it is really impressive. I’ve been a user of GrooveShark, Zune and iTunes for more than two years now and I see them as a place to download/buy/listen to songs that I already know are good and that I just need a copy of. Nothing new here. Just think of your record store but online. 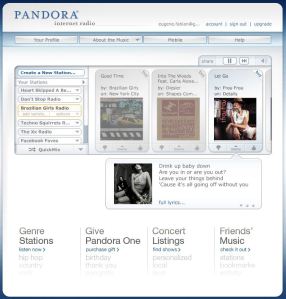 AND IT ALL CHANGED Come Pandora. Pandora is just AWESOME. The guys behind it did a really amazing job of figuring out why you like a particular song. They realized that songs have definite patterns, tunes, compositions that they can accurately recommend a song that you’ll like. This is just awesome. I can’t stress it enough. I was easily hooked listening to new songs and artists that I know I would like because of some magic algorithm the folks at Pandora made. 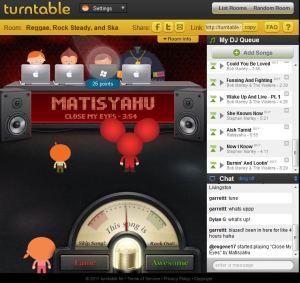 Then comes Turntable.fm. The current poster child of the startup world, turntable allows you and your random friends to play music together. No magic algorithm or pattern matching, just you and your friends and a huge list of streaming music. So far I’m enjoying the experience as it allows other to play music that you might or might not like. Rooms are created so that there can be some sort of organization depending on the genre of music you are listening to. I’m still enjoying this experience as just like Pandora, it recommends new music but with real brains behind it so repeats or super similar songs are eliminated. Having a human brain behind the selection of the songs actually makes a huge difference.

I don’t know when I’ll get tired of turntable.fm but there’s a reason why radios haven’t died til now. Until then, keep on rocking, where ever you found those tunes 😉