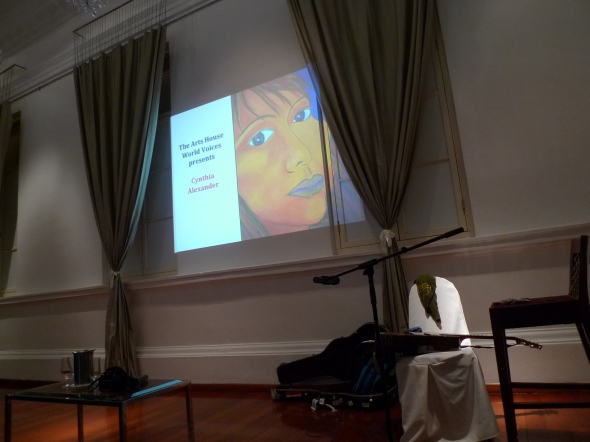 News came last month that singer/songwriter Cynthia Alexander is leaving the Philippines for good. She’ll be heading for Seattle, Washington where I know she’ll be doing great.

There’s a few arguments going around on how Filipinos don’t appreciate our own talent and will wait for others to appreciate them before we recognize the artist. Contrasts between Cynthia Alexander and Jessica Sanchez of American Idol fame has been made as well. Jessica Sanchez is an excellent singer in her own right, but comparing her to Cynthia Alexander’s situation is a bit off.

I’ve been a fan of Cynthia for more than a decade now. I discovered her from NU 107 when her first single from the second album was out, titled U & I. With deep lyrics and a great melody, I had to buy her album, fast. After which I got to memorize all her songs from that album called Rippingyarns. Me and my brothers were lucky to find her first album, Insomnia and Other Lullabyes after years of being out. There was a time in college that I got to see her live at least once every month while me and my brothers trekked all the way to Quezon City just to catch her at Conspiracy. Good times indeed. I already moved to Singapore when she started playing at 19 East, nearer our house, but was lucky enough to get a copy of her album, Walk  Down the Road, from my brothers.

Cynthia has a special place in my musical heart because she is just magnificent. The way she structures her songs, to her deep lyrics and her evolving melodies, her music is just pure art.

People are asking why she’s not famous in the Philippines and why not more people appreciate her songs considering she has won multiple awards in the Philippines and overseas. My personal take is the Philippine market is just not mature for her music. I’m lucky enough to have been exposed to several genres and develop my own taste of music. My aunt, who lived in the states for a while, always blasts 80s music and this gave me my own musical identity. Cynthia’s lyrics are deep, some people don’t get the melody, some just can’t appreciate it and more importantly, people just don’t get as exposed to it as others.

Philippine local music stations has been slammed before for not playing as many local tunes as to songs from the US. I always hear R&B, hip hop and club songs, but not as much Original Pinoy Music (OPM). After the death of NU107, one of Philippines only rock station, knowing more local tunes became much harder. I always thought that music is a great equalizer as anybody can appreciate music but then again, local stations has control on whose music they play and unfortunately most of it is not from the Philippines but from the US. I highly doubt it that we don’t have good bands as I hear them all the time. I guess to be appreciated by the masses, it’s takes more than just talent.  (darn luck :P)

Cynthia Alexander has three studio albums and one live album. You can check out her music at http://www.myspace.com/cynthialexander

If you want some vids, here are a couple of my favorite ones I found on youtube.

I took the picture above during one of her rare gigs here. Such a fitting image for her departure. I know she’ll make it big in the US and I’m happy for those Seattlelites who’ll be catching her gigs soon.